Asia Pacific Advertising Trends 2019, published today, forecasts net ad spend after commissions and discounts for different media across 14 major markets. The outlook across Asia Pacific remains positive with MPA analysts forecasting ad gains in almost all markets this year, with ad growth across the board over 2018-23. MPA expects net ad spend in APAC to total US$235 billion by 2023, representing a 5.4% CAGR from 2018.

Commenting on the findings of the report, MPA executive director Vivek Couto said:

“The general outlook remains positive, buoyed by steady growth across almost all markets over 2019 and 2020. In addition, elections in India, Indonesia, Philippines and Thailand will further boost ad prospects this year, while India will also benefit from marquee cricket. In India, TV remains an advertising mainstay, even as affordable high-speed broadband and a strong start-up economy powers internet advertising in tandem, especially online video. China’s ad market slowed from 10.3% growth in 2017 to 7.8% in 2018 amidst macro issues, a clean-up in online advertising and an ongoing downward trajectory in TV. Nonetheless, the future for China’s ad market remains reasonably robust, with an estimated 10% CAGR for online advertising over 2018-23 fueling overall growth.

“TV advertising meanwhile remains important but is under pressure from online video and near-term macro headwinds, especially in Australia, Indonesia, Japan, Korea and Thailand. TV advertising across Asia Pacific contracted by 1.9% in 2018 and will be down by 1.4% in 2019, according to MPA forecasts. At the same time, broadcasters in a number of markets - most notably Australia, Hong Kong, India, Japan and Korea - are gaining share in online video advertising with their own branded AVOD platforms. Shifting dynamics in TV and online are likely to force more consolidation and M&A in Indonesia, Korea and Thailand in particular, as well as other markets in Southeast Asia.” 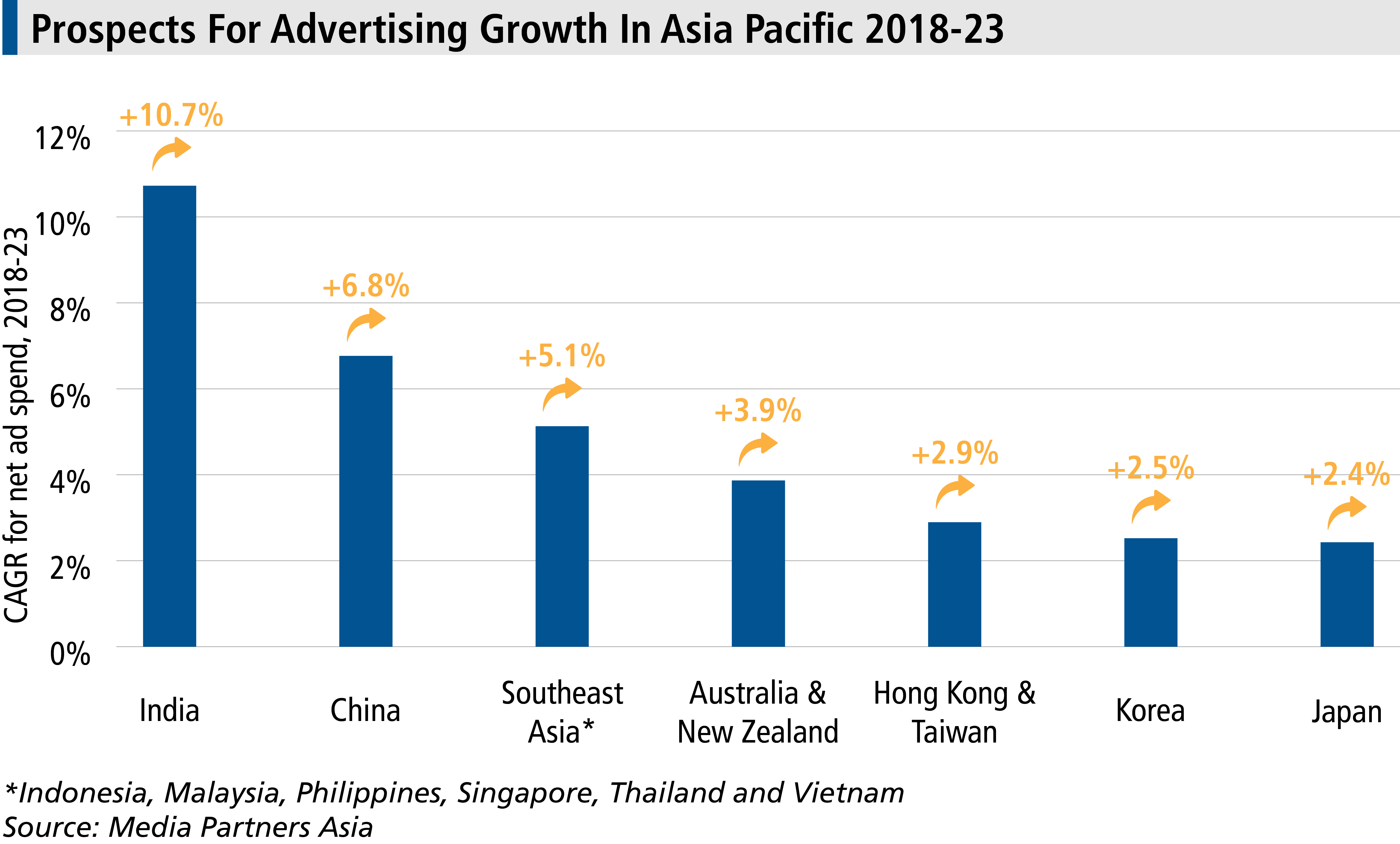 Despite a marked slowdown, China will remain APAC’s biggest dynamo of advertising growth, accounting for 65% of new ad dollars in the region between 2018 and 2023. The second-largest contributor of incremental spend will be India (11% over 2018-23), followed by Japan (10%) and Australia (5%). In terms of market size, India is on course to overtake Korea in 2019 and Australia by 2023, rising up the ranks to become Asia Pacific’s third-largest ad market behind China and Japan.

Online advertising remains a major motor of growth, expanding by 16% across Asia Pacific in 2018 to top US$85 billion. MPA projects online ad spend in APAC to climb a further 13.5% this year to reach ~US$97 billion, supporting an estimated 10.2% CAGR between 2018-23. China remains the region’s largest digital ad market by far, generating ~US$55 billion in online ad revenue in 2018. Japan was second with US$13 billion in online ad revenue in 2018, followed by Korea (US$3.7 billion) and India (US$1.9 billion).

In China, tighter regulations around online advertising reined in digital ad growth in 2H 2018. Nonetheless, China’s online ad market, led by Alibaba, Baidu, Tencent and ByteDance, will still grow at a 14.4% CAGR over 2018-23, according to MPA. Mobile remains the largest contributor, driven by in-feed advertising in popular apps such as WeChat.

By 2023, internet advertising will account for 70% of net ad spend in China. Over the same time-frame, digital’s share of ad spend will be in the 50-70% range in Australia, Taiwan and Malaysia, between 40-50% in Hong Kong, Japan, Korea, Singapore and Vietnam, and around 30-40% in India, Indonesia and Thailand. India remains one of the region’s most scalable markets for digital advertising, on track to generate US$5.1 billion in online ad revenue by 2023.

Online video advertising, mostly dominated by YouTube ex-China, grew 29% across Asia Pacific in 2018 to reach ~US$12.4 billion, 15% of all online advertising. Online video’s share of the digital ad pie is expected to grow to 20% across APAC by 2023, representing US$27 billion in spend. The largest markets for online video advertising in APAC over the next five years will be China, Japan, and Australia, with India following close behind in fourth place.

MPA Announces Launch Of The APOS 2020 Virtual Series
Online Video Streaming Minutes In Southeast Asia Skyrocket After COVID-19 Impact According To New MPA Study
Analysis Of COVID-19 Impact On Apac Sports Media
Sports Media Revenues To Grow At 7% CAGR In 11 AP Markets Over 2019-24 To Reach US$7.2 Billion
Asia Pacific Pay-Tv Industry Revenue To Grow At 3% CAGR In 2019-2024, Reaching US$66 Billion By 2024
Asia Pacific Online Video Opportunity To Scale To US$50 Billion By 2024
Growth In Video Content Investment Across India, Korea And Southeast Asia Accelerates To 12% In 2018, Up From 8% In 2017
AMPD Research: Australian SVOD Market Reaches 10.2 Million Paying Subs In April 2019
Media Rights For Cricket To Reach US$2 Billion Worldwide By 2021
Net Ad Spend In Asia Pacific To Expand By 6.2% In 2019, After 6.3% Growth In 2018
Load more