AMPD Research’s latest study examined SVOD viewers as well as account holders who pay for streaming services, with most services allowing multiple users per paying account. The study interviewed a nationally representative sample of 2,100 respondents aged 15+, revealing that one in four Australian households subscribe to Netflix, the market leader, and around one in five subscribe to a dedicated sports service.

The average subscribing household pays A$35.30 (US$24.86) per month for 1.9 SVOD services, with the average viewer watching almost 10 hours per week of TV series and movies alone. Sports consumption is more difficult to pin-point in a survey, due to seasonality and its event-driven audiences, but AMPD Research estimates that the average viewer’s total viewing of subscription-based content exceeds 12 hours per week. In terms of subscribers, Netflix leads with 5.3 million paying accounts, followed by Stan with close to 1.4 million. YouTube Premium comes in third place with just over a million paying subs.

“Our latest survey confirms that Australian consumers have embraced subscription streaming services at a pace that is unmatched in any other major developed economy we have examined,” said Anthony Dobson, managing director of AMPD Research. “We are seeing impressive adoption rates across demographics, with 52% of the under 45s paying for video streaming services, while take-up among those over 45 is around 48%. That underscores how paying for streaming video is becoming mainstream behaviour in Australia,” Dobson added.

The study also examined customer satisfaction for subscription streaming services, as well as exploring content gaps. “On the whole, viewers in Australia are positive about subscription-based video,” said Dobson. “We employed the Net Promoter Score (NPS) method which reflects subscriber willingness to recommend services to other people. The SVOD sector as a whole has a positive NPS of 15, lifted substantially by Netflix. Dedicated sports services fared less well with a lower but still positive Net Promoter Score of 2. Netflix remains the service to beat with an impressive NPS score of 41. Netflix also recorded the highest average viewing time for a non-sports service as well as the largest paying base and share of revenue among all SVOD services in Australia.” 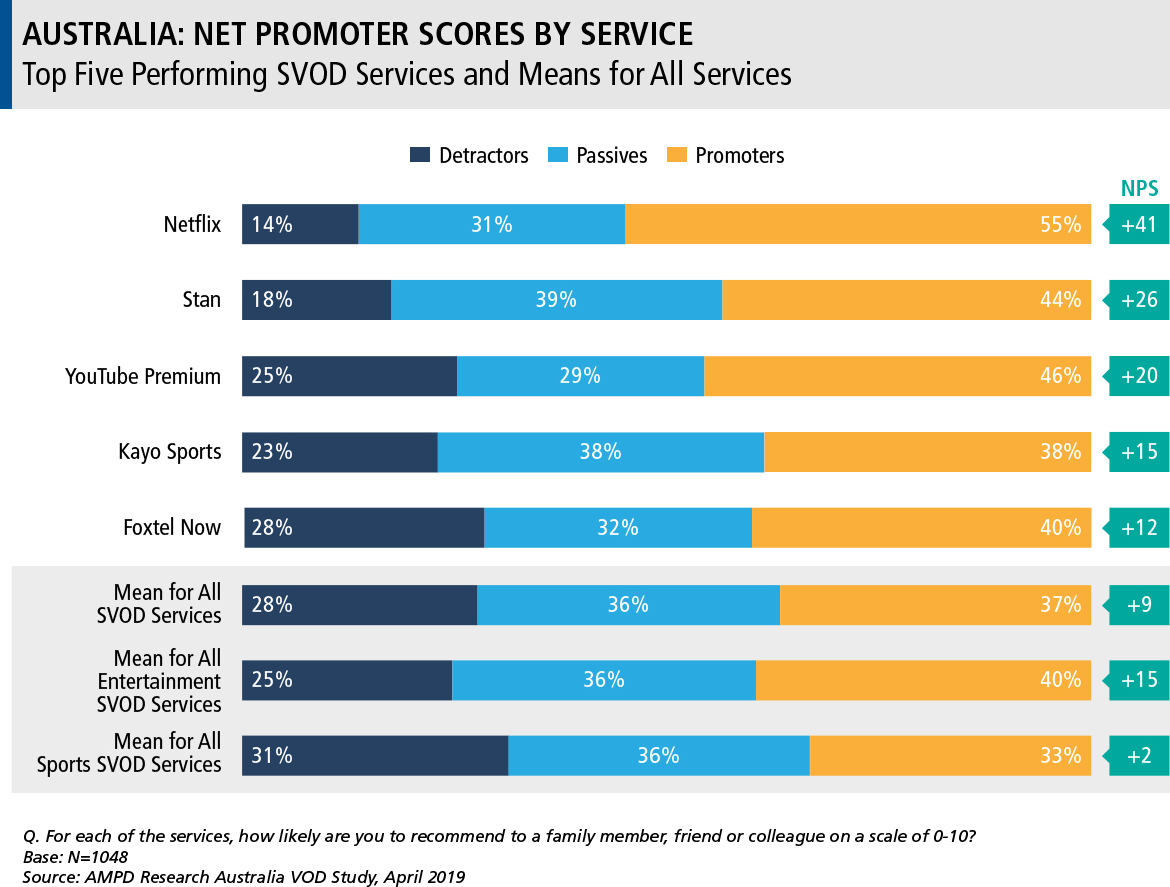 After Netflix, Stan accounted for the second-biggest share of SVOD revenue in Australia, followed by Foxtel Now. Overall, Foxtel Now registered the highest average spend among its paying base, largely thanks to its A$29 (US$20) per month add-on sports pack.

Among the surveyed services, Foxtel-backed Kayo Sports had the highest average viewing time, likely boosted by its coverage of IPL cricket during the survey period, as well as the highest proportion of viewers on a free trial.

AMPD Research also surveyed the content needs of SVOD users. The vast majority – 75% of respondents – want to see SVOD platforms carry more locally produced programming. More US and UK content is also widely sought after, with 58% of Australian SVOD viewers stating they would like to see more content from each country. However, the under 45s showed a stronger preference for more US content, while those over 45 indicated that they were underserved with content from the UK.

Younger viewers tended to be keener on a wider selection of comedy, while older viewers wanted to see more action and adventure. Two key genres, sports and kids’ content, didn’t feature in the top five genres viewers wanted to see more of, suggesting satisfaction with current offerings. Sports and kids are likely to be key SVOD battlegrounds in the future, especially as pressure rises on conventional pay-TV packaging and pricing. Around 50% of pay-TV households also subscribe to an SVOD service, AMPD’s survey showed.

“Competition for spend and viewing time is only likely to increase, driven by rising investment in original content as well as access to local and international sports,” Dobson said. “At the same time, Disney’s upcoming streaming service Disney+ will likely arrive in Australia sooner rather than later as part of its global rollout, undoubtedly becoming a key player in the Australian market.”

AMPD Research conducted an interactive online survey of Australian internet users aged 15+. A total of 2,100 interviews were administered according to representative quotas for age, gender and state/territory. The survey fieldwork took place from 6th to 15th April 2019.

Net Promoter Score (NPS) is a widely used tool to gauge customer loyalty. NPS scores vary by sector, but a positive score is generally regarded as “good”, a score of +50 is considered “excellent” and scores over +70 are rare and considered “exceptional”.

The NPS is calculated on a scale of 0 - 10 in response to the question: “How likely is it that you would recommend to a friend or colleague?” Scores of 0-6 are considered “detractors”, 7-8 are “passives” and 9-10 are classified as “promoters”. The final Net Promoter Score is calculated by subtracting the percentage of customers who are “Detractors” from the percentage of customers who are “Promoters”.

AMPD Research was founded in 2018 to help companies understand and monetize the seismic shifts in how entertainment and TV content is consumed. We set out to build a series of tools that capture actual viewing behaviour across multiple devices and platforms, to understand the consumer journey that connects viewer to content.

Founded in 2001, MPA is the leading independent provider of advisory, consulting and research services, focusing on media, sports and telecommunications industries in Asia Pacific. MPA teams, operating out of Hong Kong, Singapore and India, track 19 markets with local depth and provide in-depth analysis. MPA has advised a wide range of companies on M&A, equity and debt transactions. MPA also works with global, regional and local companies to benchmark competition and industry performance, optimize synergies, and launch new services and products across local markets.